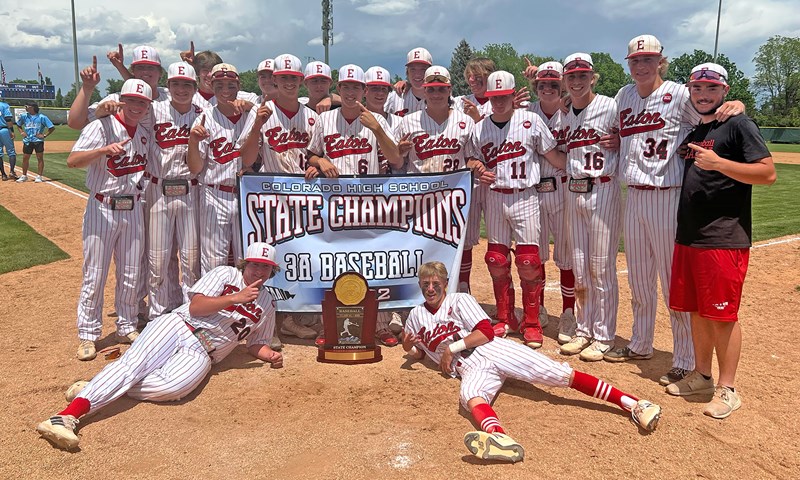 Baseball 3A: Eaton dominates the University to win a second consecutive title

GREELEY — Eaton junior Walker Martin held the Class 3A championship trophy aloft and brought it to his lips, kissing the prize for the culmination of a hard-fought season that ended the same way as a year ago for the top-ranked Reds.

With their fourth victory over the No. 2 University this season – and second in the state tournament – ​​Martin and the Reds won their second straight state title with a 10-4 victory over the Lions on Saturday at Butch Butler Field. .

A week after handing the Lions their first loss in the tournament, the Reds – led by Martin at the plate and junior pitcher Tate Smith at the mound – took a big early lead and held on for a six-point win.

“It’s hard to talk right now,” Martin said. “I’m just a little speechless. I know our guys were going to get ready to play today. The university was ready to play. Sometimes they hit us hard. I knew it was a big one, so I’m just super excited. There were a lot of people here and it was just a lot of fun playing with the boys for the last time who are seniors. I couldn’t ask for a better way to date them.

Eaton wasted no time in taking the lead. Three hitters, Martin got his first hit and drove in the game’s first run for the Reds. Martin ended up making it 4 for 4 and made four runs. Two batters past Martin, Smith helped his own cause with a two-run single. That gave the Reds a 3-0 lead and they added two more in the first set to take a 5-0 lead.

“You couldn’t script this part better,” Eaton head coach Todd Hernandez said. “To go out and get the guys on base with no one there and drive in a run and we were disciplined at home plate and did whatever we needed to. Scoring five points really takes some of the pressure off, gives you some leeway because you know they were going to attack us.

Martin’s second at bat came with one out in second and his solo home run gave the Reds a 6-0 lead after an inning and a half.

University responded late in the inning, but that was the only frame the Bulldogs could get to Smith. River Jackson’s two-run homer was part of a three-run inning as University cut Eaton’s lead in half to 6-3 heading into the third.

The Bulldogs got a point in the third on an error and at 6-4 it would be as close to the Reds as they could get.

An RBI single from Smith in the fourth gave Eaton a 7-4 lead and Walker walked a charged walk in the fourth to tackle a run to make it 8-4. The Reds added a pair of insurance runs in the top of the seventh on RBI singles from Martin and Smith to account for the final 10-4 margin.

On the mound, Smith allowed five hits in seven innings and struck out 11. He had just nine pitches left in the bottom of the seventh and retired the Bulldogs in order for the second time in the game.

University had two runners in both the fourth and sixth innings, but Smith was able to keep the Bulldogs from scoring more runs after the third.

“I didn’t feel my best, but I didn’t care,” Smith said. “I knew I had the best defense in the state behind me. I had nine pitches left in that last inning and it was just a ground ball and I knew they were going to play. I put all my trust in my teammates with whom I have worked so hard for so long.

The title was the 12th for the Reds since 1995 as they finished the season with a 28-2 record and an unbeaten run through the state tournament.

University finished its season at 24-6.

“It’s indescribable,” Hernandez said. “It’s just a great group of kids and they’ve been competing all year. Winning back-to-back state titles is extremely difficult because you’re going to have a target on your back all year. Coming off the highs of a win last year and playing a regular season where the stakes aren’t as high every game takes some getting used to. Come playoff time, they were awesome.

NHIC to provide free insurance coverage to all Saudis